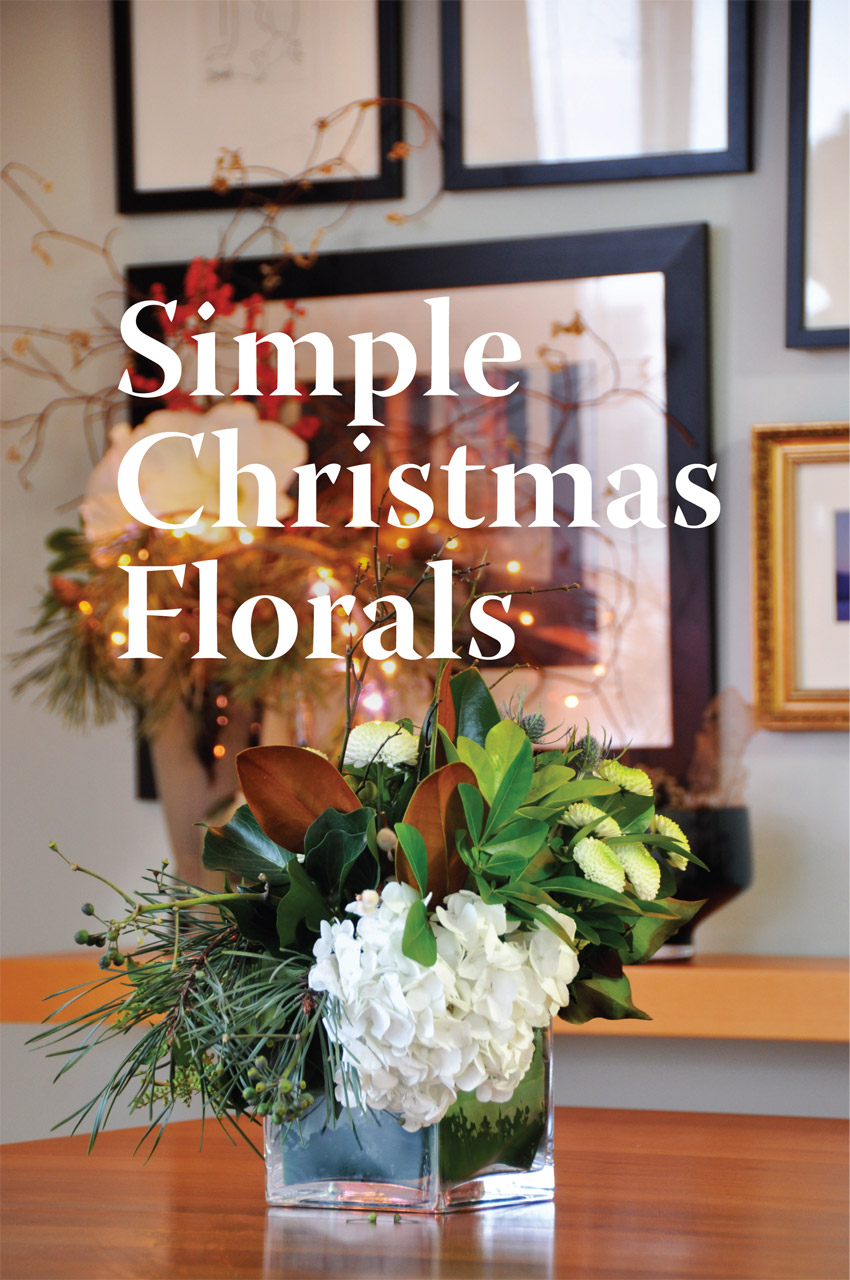 As someone who sits in front of a computer all day, I really enjoy crafts and getting my hands dirty. Since we were going away for the holidays and wouldn’t have a tree this year, I turned my attention to Christmas florals, to bring the outdoors indoors, and get my home ready for December entertaining. Fast, cheap and easy was my mandate.

Nothing could be easier, and cheaper, than the trend of a single stalk of berries and/or branches in a antique glass jar. I love that look, but I don’t own any appropriate vessels. Instead I have a variety of vases, almost all of which have been given to me over the years, so they each have meaning. The challenge was to make each arrangement interesting, long-lasting, easy and inexpensive.

I saved money by using what I already had, and foraging outside for the greenery. This is what I purchased:

So, I spent $60, and filled seven vases. This is how they turned out: 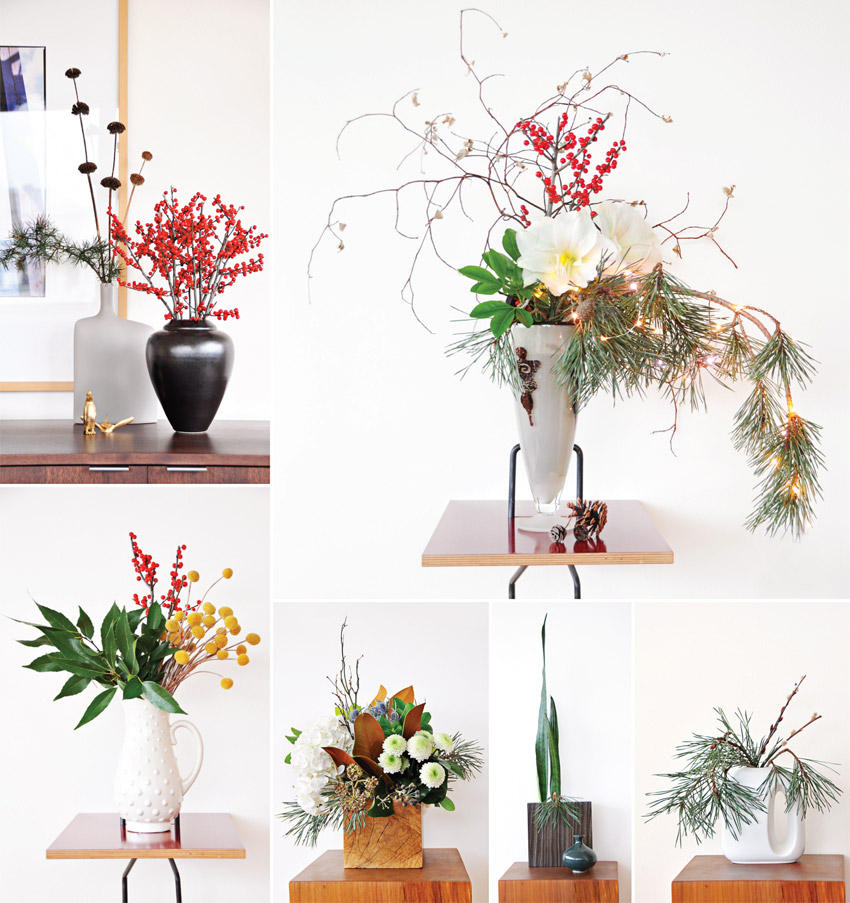 Here is a breakdown for each vase. This black vase was one of the first that was ever given to me. I think it looks great with the red ilex berries. My sister says that vase is dated, and should be retired, but I disagree, so I pair it the more modern vase that she gave me, the grey one in the back. Just added a small branch of evergreen to the existing stalks, and blam! Instant Christmas. Super easy. 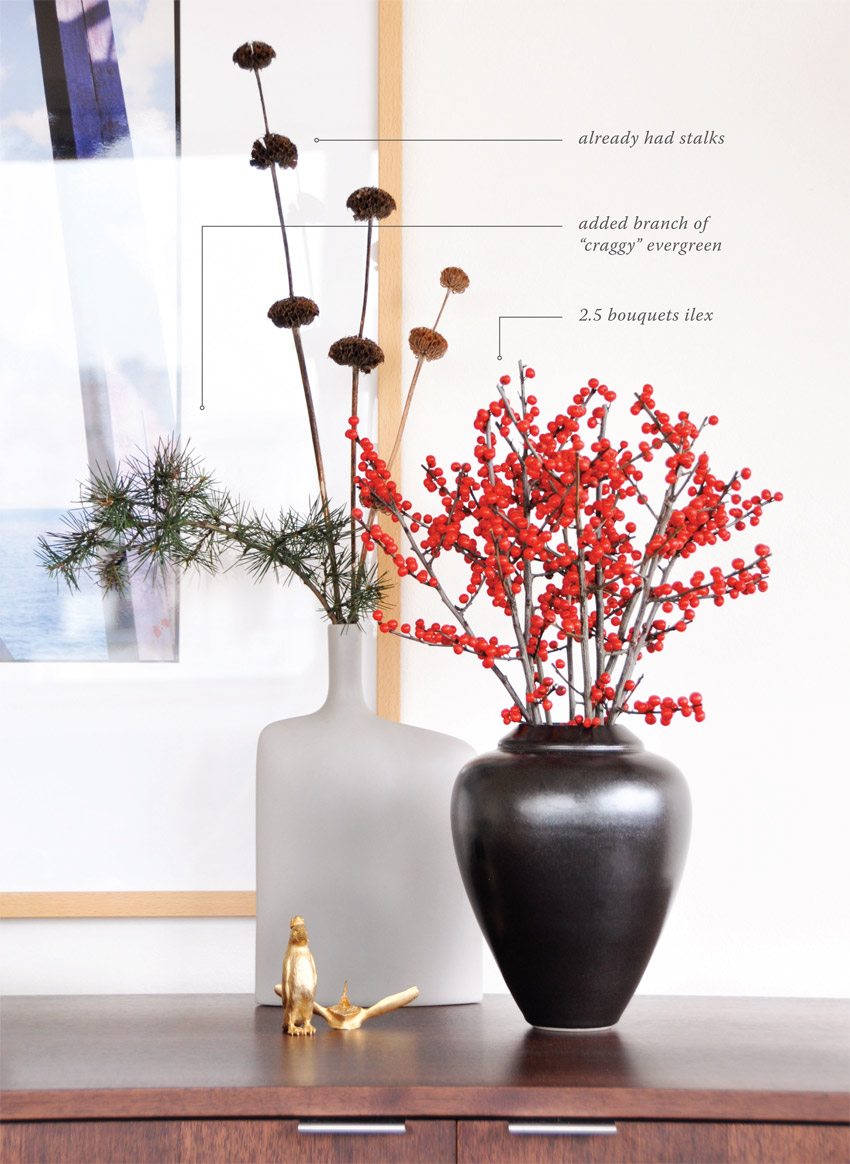 The next vase is from the 1990’s, evident from the swirls. The challenge of this arrangement was to make it asymetric, without it toppling over. Amaryllis, although expensive, lasts for over two weeks, and it is a lot bang for your buck. The fairy lights were purchased at Restoration Hardware a few years back. 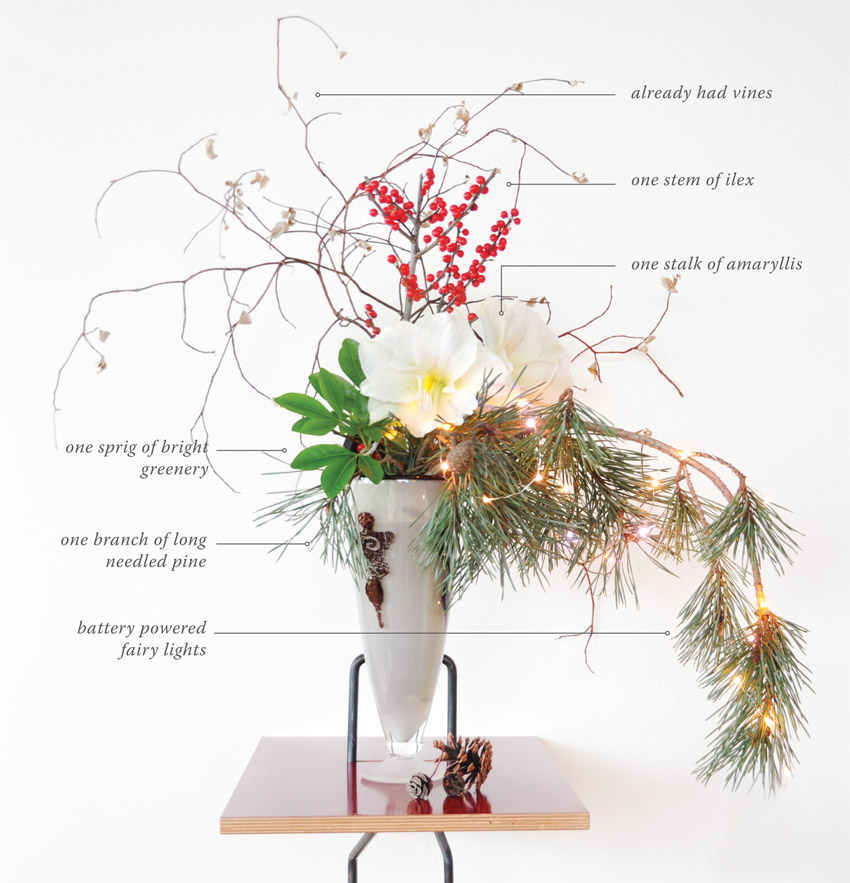 This white dimpled pitcher vase was a wedding gift to my mother from her mother. Grouping the three different colours together in clumps makes this arrangement more interesting. 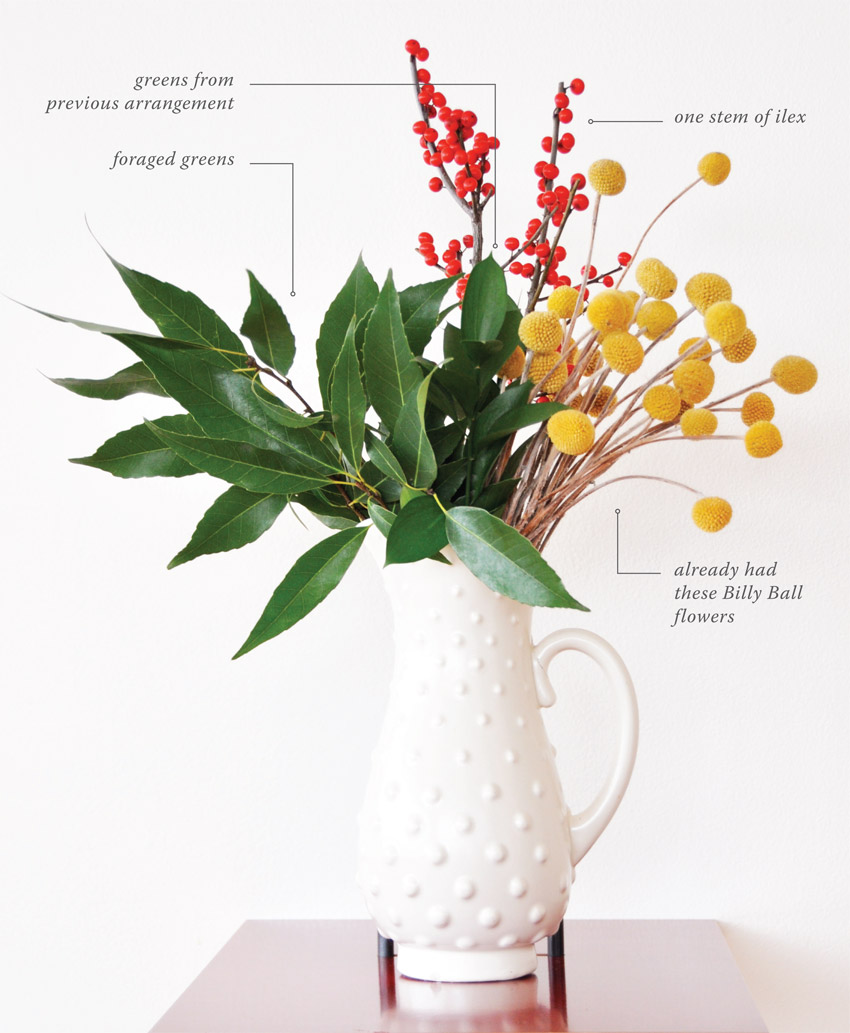 The next two vases used up most of my foraged greens, and purchased flowers. These vases are for the dining room table and the bar I set up for entertaining, so they have to be interesting from all four sides, and short enough to talk over. Actually, the clear square vase is the liner for the wooden vase. But I used the liner separately, and lined it with leaves from my Chinese Evergreen houseplant, and put a cheap glass container in the wooden box to hold the water. Making sure I have enough greenery, varying in colour and texture, I start by layering clumps of green in one hand, and add flowers, different greenery, different flowers, all the while trying to look at it from all four sides until I’m satisfied. When I have run out of ingredients to add, I trim all the stems until they are quite short, and bind them together with an elastic band. Then I just plunk them in the vase. I wanted these arrangements not to be overly Christmassy, so I stayed away from using any red, and played up the chartreuse in foliage and the mums to complement the white of the hydrangeas. 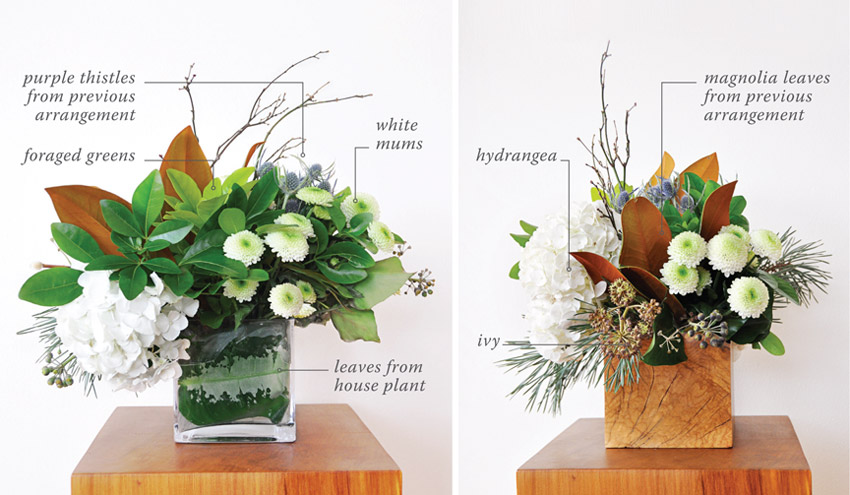 These last two vases are the smallest of my collection, and the wooden one is the only one that was not a gift. I added cuttings from my Mother-in-law’s Tongue plant two years ago, and even though it spends most of it’s life in utter darkness, it is sprouting new leaves. Shocking. There are two test tubes inside the wood to hold the water, so there was no much room for anything else but this small sprig of pine. But I love the contrast in scale and texture, and this is one of my favourites.

The small white vase lives in the powder room. Since it is small, it looks good no matter what I put in it. A bit of evergreen, and two tired old pussy willows, and it says Christmas in an charming and understated fashion. 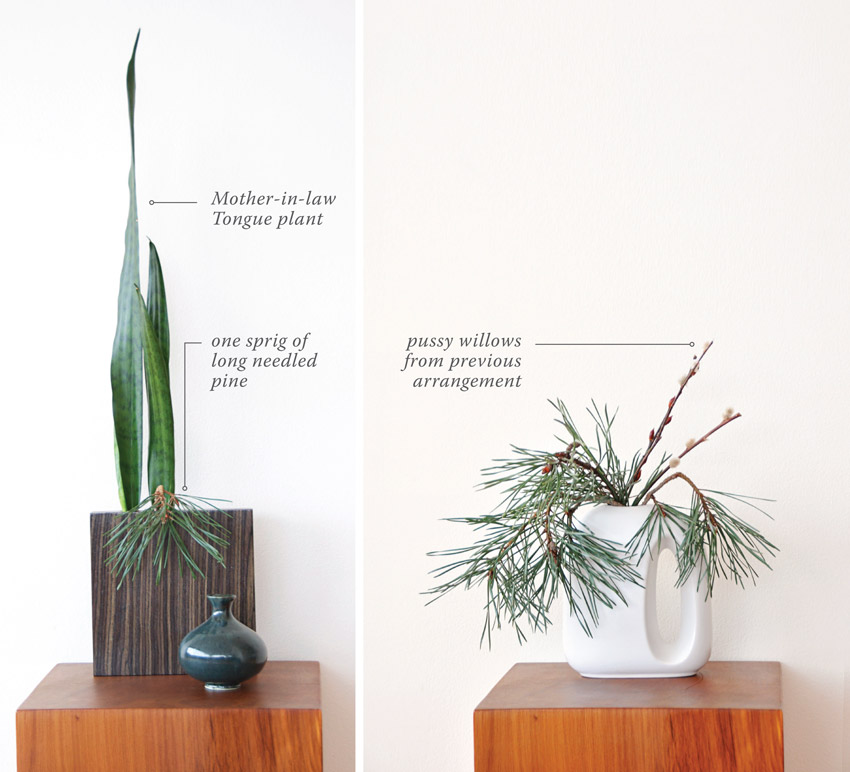 All in all, I am pretty happy with the results, and find that I like the most simple arrangements just as much, if not more than, the ones that had all the flowers.

get posts by email